The Turbine Assembly of High-Speed Dental Handpieces – Part One 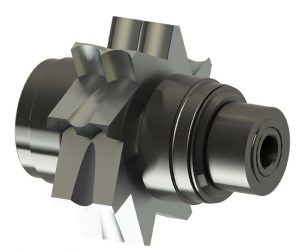 Due to their capacity for movement, the turbine is often the most common source of functional-based complications. The turbine contains two critical components. The first is the chucking mechanism.

This is designed to hold the dental instrument.

The second component is a rotary-based system that is responsible for spinning the bur. The speeds of this system may reach up to 6,000 spins per second at times when air pressure is being applied. In order to ensure that your handpieces are working optimally, it is advised that you become familiar with the turbine assembly of your instruments.

In doing so, you will be quickly able to identify when your instruments are not functioning at full capacity or are in need of repair. Continue reading to learn about the other components of the turbine assembly.

A Closer Look at the Rotary System
As previously stated, the rotary system of your dental handpieces spins the high-speed device. This unique system includes different parts. First, there is an impeller. This is often referred to as a “rotor”. This is responsible for catching the drive air. It is situated on top of a spindle.

This mechanism rotates in a clockwise direction at very high speeds. It is fully supported by two different bearings and two O-rings that are suspension-based. These are very small bearings, but, are considered to be the “heart” of the assembly section on dental handpieces.

According to manufacturers and those that specialize in dental handpiece repair, the instruments do not experience failure as a result of power and speed issues, but, because of the failure of these small bearings.

Complications Associated with Bearings
When it comes to the miniature bearings in the turbine assembly, the most important component is the retainer piece. This is often referred to as the “cage”. This elements assists in securing the ball bearings which are located in special sections of the instruments called “raceways”.

Due to the harsh sterilization procedures performed on the instrument on a regular basis, this section often becomes exceptionally brittle. When the retainer piece reaches the point of disintegration, the turbine is unable to rotate. As a result, power is completely lost. You will know when the retainer piece is close to or at this point during the lubrication process.

You will find that a black-colored substance is emitted from the dental handpiece. At this point, the instrument will be in need of repair. There are other signs that could indicate the disintegration of the retainer piece in your dental handpieces. These include:

This concludes Part One of this series. Be sure to return next week for the conclusion where you will learn how to extend the life of the turbine assembly, and have your dental handpieces serviced!

We have moved to Liberty Indiana, however if you already have pre-paid mailers from our New Paris address, you can still use them.
Both addresses are active. As always you can expect the same Fast, Quality Repairs from us! Dismiss